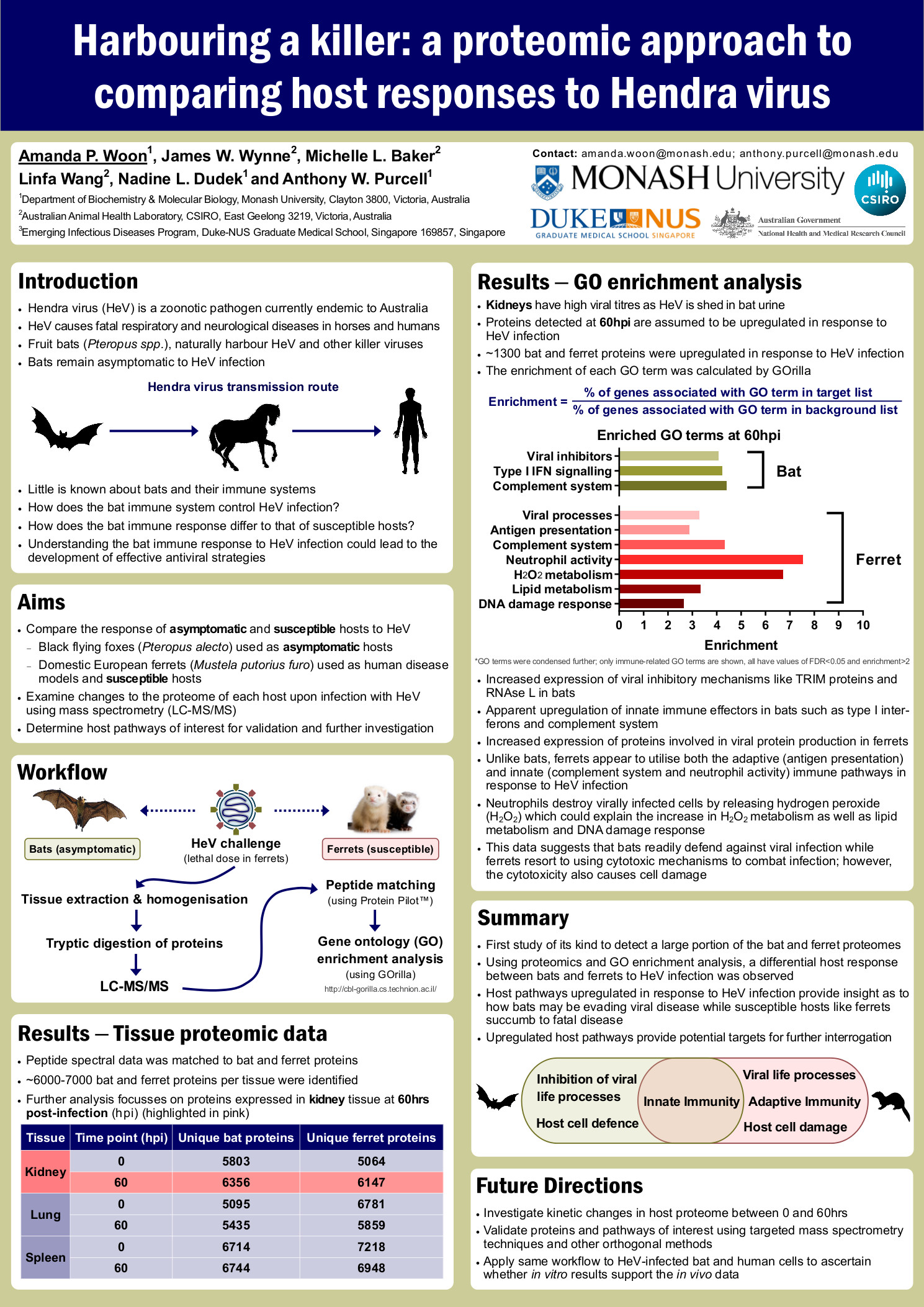 Harbouring a killer: a proteomic approach to comparing host responses to Hendra virus

Bats are a major source of zoonotic pathogens, harbouring over 60 different viruses including Ebola, SARS, MERS and Hendra (HeV), many of which pose a serious threat to human and animal health. HeV is an emerging zoonotic virus currently only found in Australia. It causes respiratory and neurological diseases in horses and humans and is characterised by high morbidity and mortality. However in its natural fruit bat host (Pteropus spp.), HeV does not seem to cause any symptoms of illness, with high titres of virus shed in bat excretions. Currently, there is no vaccine or treatment against HeV for humans. We hypothesise that comparative studies of the bat and human immune response to HeV may provide valuable insight into deciphering the elements of an effective anti-viral strategy. In this study, two hosts, bats (Pteropus alecto) and ferrets (Mustela putorius furo) (human disease model) were challenged with HeV and tissues were extracted at several time points. Tissues were homogenised and analysed by mass spectrometry (LC-MS/MS). Identified proteins were then quantified using label free approaches. Preliminary data has highlighted a difference between the bat and ferret host response to HeV infection. In bats, there was increased expression of proteins involved in innate immune responses such as the type I interferon signalling pathway. However, in ferrets, there was a strong skewing towards activation of adaptive immune responses including proteins involved in antigen processing and presentation. In both models, there was an overlap in the induction of proteins involved in the complement system. These data provide candidate pathways for further examination using targeted mass spectrometry and orthogonal techniques. Validation using these sensitive and quantitative approaches will further elucidate the mechanisms by which bats are able to control viral infection while humans succumb to disease. Ultimately, it will also address the question of whether bats tolerate virus due to superior innate immunity or whether a propensity towards immunopathology in humans contributes to the mortality of HeV.